The United States-Germany Tie Conspiracy (and how we advance, the goal differential, and the prisoner’s dilemma) 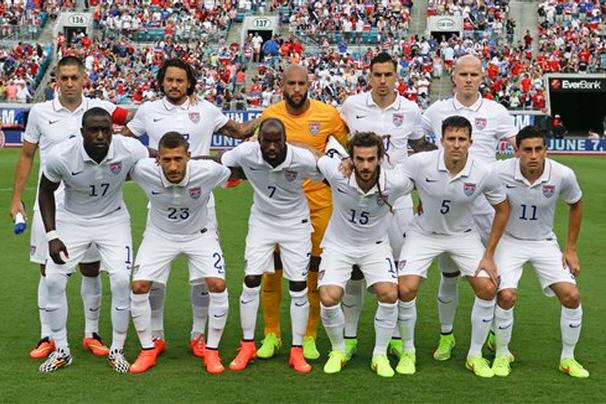 While normally I have no interest in sports, I find something truly compelling about the World Cup. It’s worth noting I never have had an interest in soccer or the Olympics, but for some reason I just find the World Cup massively entertaining, for reasons unknown to me. As if the action on the pitch wasn’t exciting enough, for us lovers of politics and rational choice theory, tomorrow’s game between the United States and Germany offers an interesting analogy for nationalistic cooperation.

The United States and Germany are tied with four points each, both having won and tied a game, while Ghana and Portugal are tied with one point each, both having lost and tied a game. Because wins get three points, ties earn a single point and a loss earns no points, if the United States wins or ties against Germany then they will have more points than is possible for either Ghana or Portugal to match by winning, so they will advance to the next round – because Germany has four points as well, this point holds true for them as well.

But if the United States loses tomorrow, then they will have four points, such that if either Portugal or Ghana wins their match (rather than tying) then they will go from one point to four points, thereby being tied for points with the United States. The tiebreaker is decided by goal differential – the amount of goals scored by the team over the course of the games, minus the amount of goals scored against them. This would not be a good deciding factor for the United States, because the United States is +1, while Ghana is only -1. This is troublesome because Germany is a goal scoring powerhouse, while the United States is not, so if we lose it might be by a lot, taking our goal differential down considerably, but if not considerably, then we will go down by at least one point if we lose at all. On the other hand, Ghana are thought likely to beat Portugal, given that Portugal’s star player has been under-performing due to an injury. If they beat Portugal, then Ghana will gain at least one goal in goal differential, taking them to 0, and thus tied with the US if we lose by (only) one point. If Ghana wins by more than one goal, and the US loses then Ghana will advance and the United States will not – if we tie at 0 on goal differential then whom advances will be decided by who scored the most goals, and if a tie there, then through drawing lots. Thus, it is in the interest of the US, if they lose, for Portugal to beat Ghana, as it is unlikely that they will win by enough to over come their -4 goal differential to compete against the US to advance to the next round.

It’s all so beautifully complicated and I love it!

While Germany is in no real danger of being defeated by the United States tomorrow, it is still not out of the realm of possibilities, as this World Cup has been full of surprises and upsets (also, transitivity of talent is an absurd notion, but the US did beat Ghana, and Ghana tied Germany — just saying). If Germany and the US tie, then Germany will still win the group, having a higher goal differential than the United States. So there seems to be a reason for Germany to settle for a tie. The United States doesn’t have much hope of defeating Germany, and would be ecstatic with a tie, due to it’s resulting in their advance, so the US has reason to aim for a tie. Thus, there is plenty of reason for the two sides to form a secret agreement to play an easy-going and non-draining game resulting in a tie, as both parties would get what they want: Germany wins the group and the US advances to the next round.

Of course, there are dangers to such a deal; after an easy-going 90 minutes with a tie, one team, or even just one player on one of the teams, might decide to score in the last seconds, in order to win the match. The United States might be tempted to do this in order to win the entire group, or Germany might do this just because they decide it is beneath them to tie with the United States at football. Moreover, someone on the German team might become distrustful of the intentions of the Americans, and suspect that they are planning to upset their arrangement, such that someone on the German team preemptively breaks the tie in order to avoid potentially being tricked by the US. So while there are reasons to work cooperatively and tie, it seems highly possible that the teams will not work cooperatively to protect their interests, as there is too great a threat posed by the other team not working cooperatively and breaking their deal for the team to not break their deal first.

This is somewhat similar, though with important differences, to the prisoner’s dilemma – a thought experiment meant to show that out of distrust of the intentions of others in a group, an individual can take an action with potentially worse consequences for them than the consequences of keeping their agreement with or acting in the interests of the group. In the prisoner’s dilemma, two accomplices in a crime are arrested and kept in separate holding cells, allowing a prosecutor to approach each individually with an offer. The offer is that if they confess and their accomplice doesn’t, then if they testify against their accomplice then they get off free and the accomplice goes away for a long time. The prosecutor lets them also know that she has extended the same offer to their accomplice. If both confess then they will each go away for some time, but if neither confesses then they will only be tried with minimal charges due to lack of other evidence. There is quite a risk to confessing then, because if both confess then it would be worse for each individually than if neither had confessed. But there is also a considerable risk to not confessing, because if the other accomplice confesses and they do not, then they are going away for a long time. Quite the dilemma. Many people have the thought that they should confess, as it is better for them not to take the risk that they remain silent while the other confesses, even though it is better for all if both do stay silent.

Secretly agreeing to a tie and staying true to this agreement would be akin to both accomplices remaining silent, it is the option that is the best for both teams. Of course, making the agreement to tie and then breaking it out of self interest – winning the match — is similar to confessing while assuming the other accomplice will remain silent. That both criminals confessing is the worst result for them both is analogous to both teams breaking their promise to play to a tie, because it is possible for either team to lose, which is a worse result than tying. There are some important dissimilarities on this last point, as while it is bad for both prisoners that they both confess, it will only turn out to be bad for one team if both decide to break their promise to tie, as the other will win. This point in fact shows that the teams do not face an equivalent of a prisoner’s dilemma, rather they only face a situation where it would be in both of their interests to compromise, though if they did so it would be difficult not to break this compromise out of distrust for the other team breaking their arrangement. So the prisoner’s dilemma doesn’t fit perfectly here, but if both teams recognized the overall benefit of agreeing to a tie, and yet broke that agreement, the prisoner’s dilemma offers some explanation by analogy as to why it can seem more rational to pursue the potentially worse option overall.

Tomorrow I’ll be rooting for America to do what it does best — make back-room deals with foreign nations in order to advance strategic interests. U-S-A, U-S-A, U-S-A!

This entry was posted on June 25, 2014, 9:27 pm and is filed under Misc. Philosophy, Politics. You can follow any responses to this entry through RSS 2.0. You can leave a response, or trackback from your own site.